What Is Petcoke Used For?

Petroleum coke, or Petcoke, is a solid, carbon-rich material similar to coal but with different properties. It is derived from oil refining, and it’s a byproduct produced during the cracking process. Petcoke can be used for different purposes based on its characteristics.

High-grade petcoke can produce electrodes for aluminum and steel industries due to its low heavy metal and sulfur concentrations while low-grade petcoke is often used to fuel power plants or industrial heating applications. It is used as fuel in various industrial applications, making it an important part of industrial processes.

Testing petcoke is important because it ensures safety and usefulness. Data obtained from calcined petroleum coke samples are used in commercial transactions, controlling plant operations, and allocating production costs  Continue reading to learn more about petcoke uses and where this important fossil fuel comes from.

Petcoke is a carbon fuel that resembles coal. It’s a byproduct of crude oil refining, and it is derived from the final cracking process of crude oil. Cracking is a heat-based chemical engineering process that breaks large petroleum hydrocarbon molecules into smaller molecules. Components of the crude known as bitumens which contain a higher number of carbon atoms than regular oil are left over as the final by-product residue. This residue is further processed by modern refineries in thermal cokers to extract additional gas and oil products with the final product being a carbon-rich solid material that we refer to as a coke.

What Is Petcoke Used For?

Fuel-grade petcoke is a highly stable fuel, making it safer to transport than other types of fuel due to its low risk of combustion. It can also be manufactured inexpensively, making it a cost-effective fuel source commonly used in power plants. Industries often use petcoke as a fuel to make steel, glass, lime, paper, brick, fertilizer and cement. 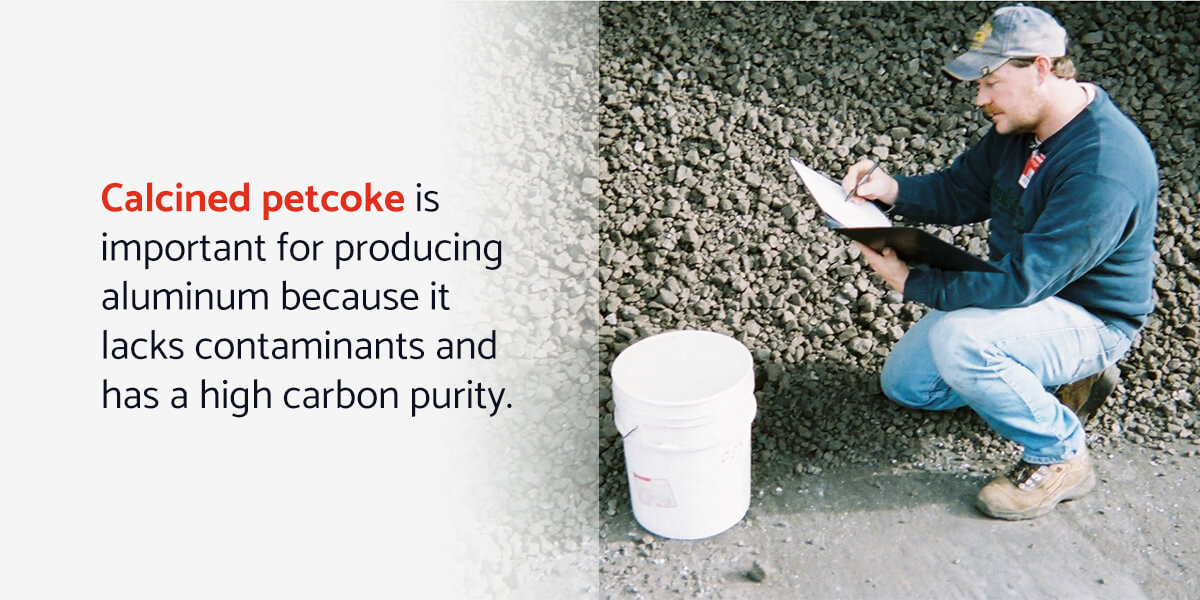 When petcoke is heated even further, the heat removes volatile matter, impurities and moisture to create calcined petroleum coke. This process increases electrical conductivity, so industries can use the calcined petcoke to make graphite, steel, titanium and aluminum. Calcined petcoke is important for producing aluminum because it lacks contaminants and has a high carbon purity. It also produces titanium dioxide, which is a safer alternative to lead found in paint.

Petcoke is manufactured differently than metallurgical coke (met coke), and it has different properties. Bituminous coal is separated into two subtypes by use, which are metallurgical and thermal. Met coke can be formed from the special coking properties can form met coke from of low-sulfur, low-ash bituminous coal.

Special coke ovens fuse inherent ash and fixed carbon by heating metallurgical-grade coal at one thousand to two thousand degrees Fahrenheit without air. Bituminous caking coals soften and behave like plastic at 400 degrees Celcius, and they begin to fuse at higher temperatures. Volatile gases trapped inside the coal cause it to swell until the high heat expels them. Finally, the mass resolidifies to produce a porous solid fuel.

Petcoke has a higher nitrogen and sulfur content, giving it a higher heating value than met coke and bituminous coal. It also has a lower ash content. Petcoke forms in a highly thermal environment, which gives it a low volatile content.

Where Does Petcoke Come From?

Petcoke production is a result of the oil refinery process. Petcoke comes from the bitumen that exists in crude oils and tar sands. When crude oil is distilled, it separates into various fractions. The oil’s lighter fractions contain gasoline, diesel, fuel oil, jet fuel, liquid petroleum gas, kerosene, naptha and other miscellaneous oils, lubricants and waxes. . The oil’s heavier portion goes through a coker for processing. During processing, pressure and high heat separate any lingering lighter parts, and petcoke remains.

How Much Does Petcoke Cost?

As of the third quarter of 2022, petcoke costs approximately $735 per megatonne. This is an increase from the price during the second quarter of 2022, which was $379 per megatonne. The second quarter’s lower price was mainly due to the changing international conditions. In the third quarter, the price increased due to the United States and Europe’s ban on Russian oil. Europe’s increased oil demand increased American oil exports, which also increased the prices of the oil used to produce petcoke.

Why Is It Important to Test Petcoke?

Testing petcoke is important because testing determines its usefulness, safety and quality. Testing petcoke allows you to make sure its metal, sulfur and carbon content are at a safe level for the environment and industrial equipment.

Making sure metal and sulfur concentrations are low protects refining equipment and the environment from damage, and checking carbon content can help you reduce greenhouse gas emissions. With proper testing, you can make sure your petcoke meets industry standards and sell quality materials to your clients.

Test Your Petcoke With McCreath Labs

Petcoke is important for industrial processes because it’s a cost-effective fuel. It is a byproduct of the oil refinery process, and it provides fuel for various industries to produce materials such as paper, brick, steel, aluminum, glass, fertilizer, lime and cement. Before selling Petcoke, it’s important to conduct sampling and testing in order to confirm the material meets the intended requirements.

Testing ensures petcoke meets contractual requirements, is safe for industrial equipment and contains as few greenhouse gases as possible. When you trust a reputable company to test your petcoke, you can provide quality material and build a trusting client base.

McCreath Labs offers material sampling services to help you meet industry standards. We are one of the country’s top mineral sampling laboratories with over 143 years of experience. Our highly knowledgeable professionals meet the strictest quality requirements while creating positive experiences for our clients.

With top-of-the-line instruments and an unbiased team, you can trust us to deliver honest, objective results. Contact us to learn more about how we can ensure the validity and quality of your petcoke inventory or submit a sample today.